China has always been a bit of a mystery to us as we haven’t explored much of Asia, and it is so vast and different from what we are used to. We started our Thanksgiving 2017 Asia discovery trip with 24 hours in Beijing, exactly the amount of time we were allowed to stay in China without a special visa. The almost 14 hour flight from Chicago to Beijing (check out our itinerary here) was not even long enough for us to enjoy all the free-flowing drinks and food, watch all of the movies we wanted, and get a decent night’s sleep. The presentation of the food was more than we were expecting as was the genuine care of our flight attendant.

We were greeted with a choice of drinks and some warm nut mix, which Bettina ate for us both. 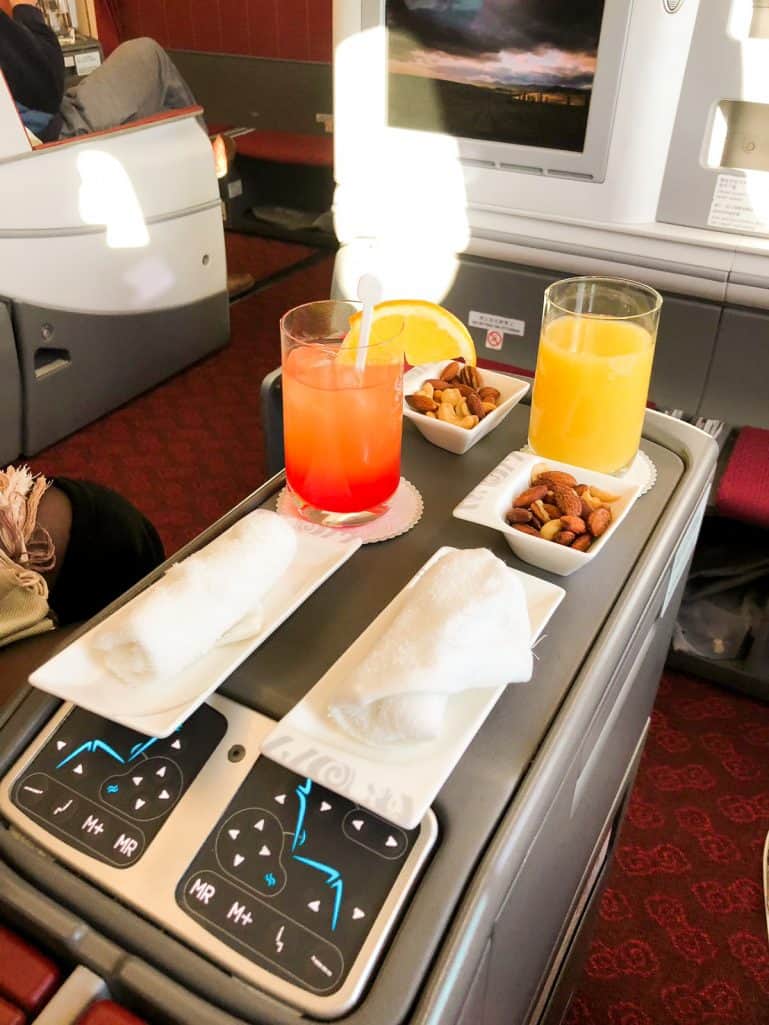 After take-off, we were served some amuse-bouche and more drinks, followed by the starter - smoked salmon and roasted duck, served with your very own bread basket and rose shaped butter. 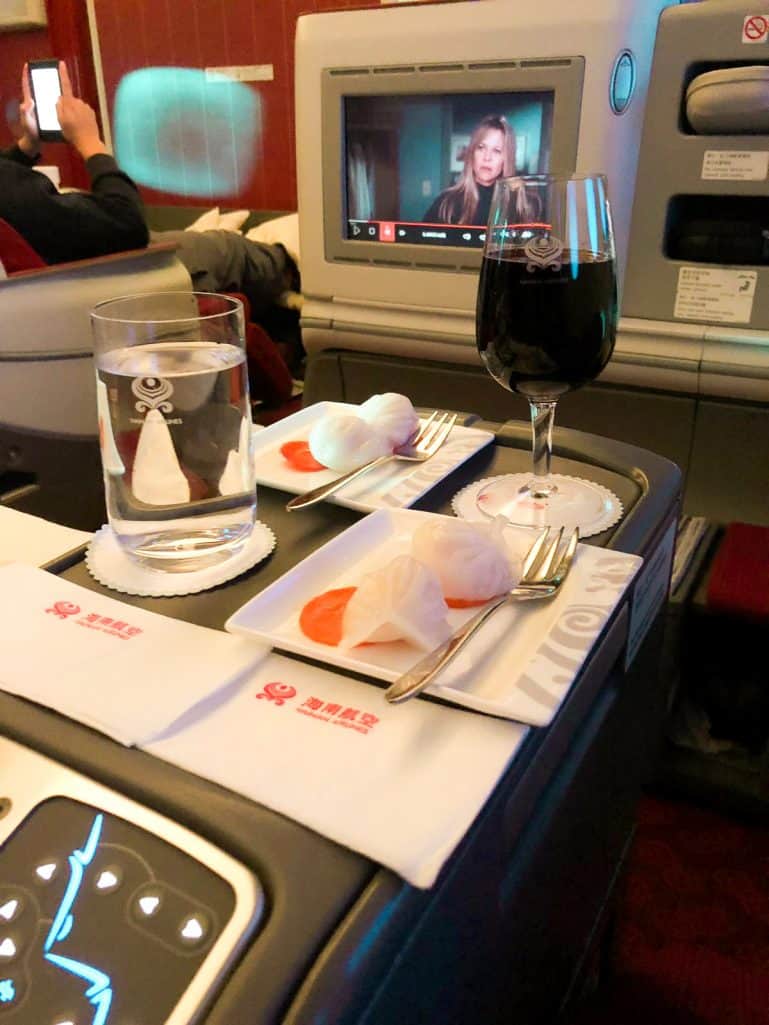 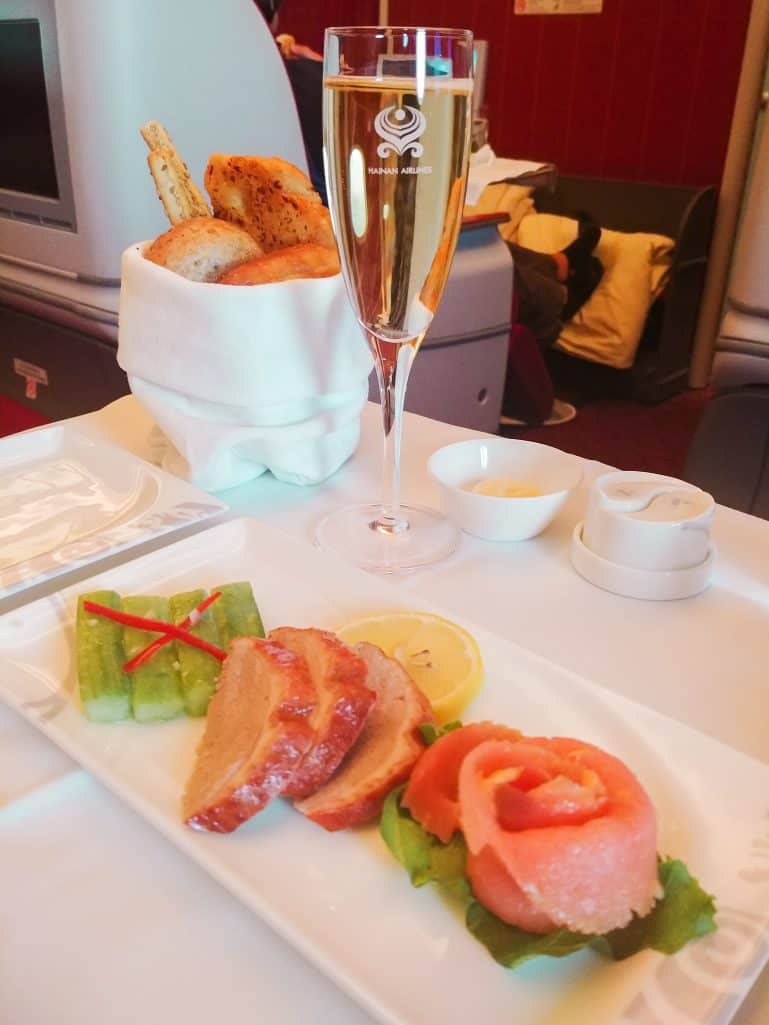 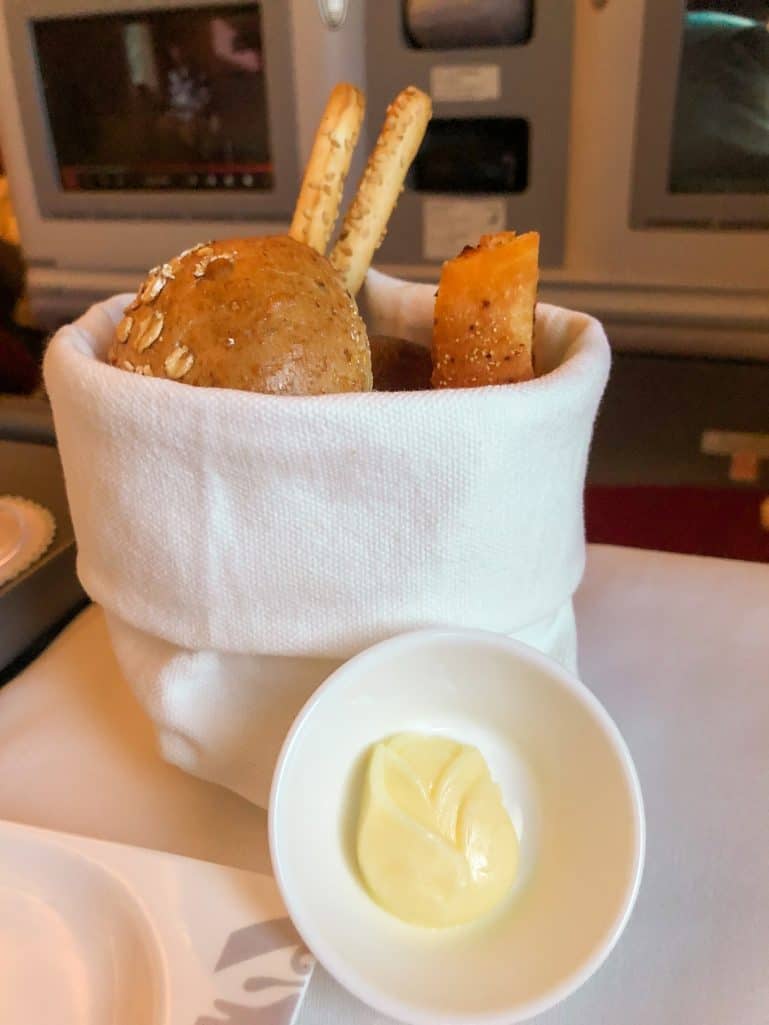 As a main course, we had a choice of Western or Chinese meal. Guess which one we went for! 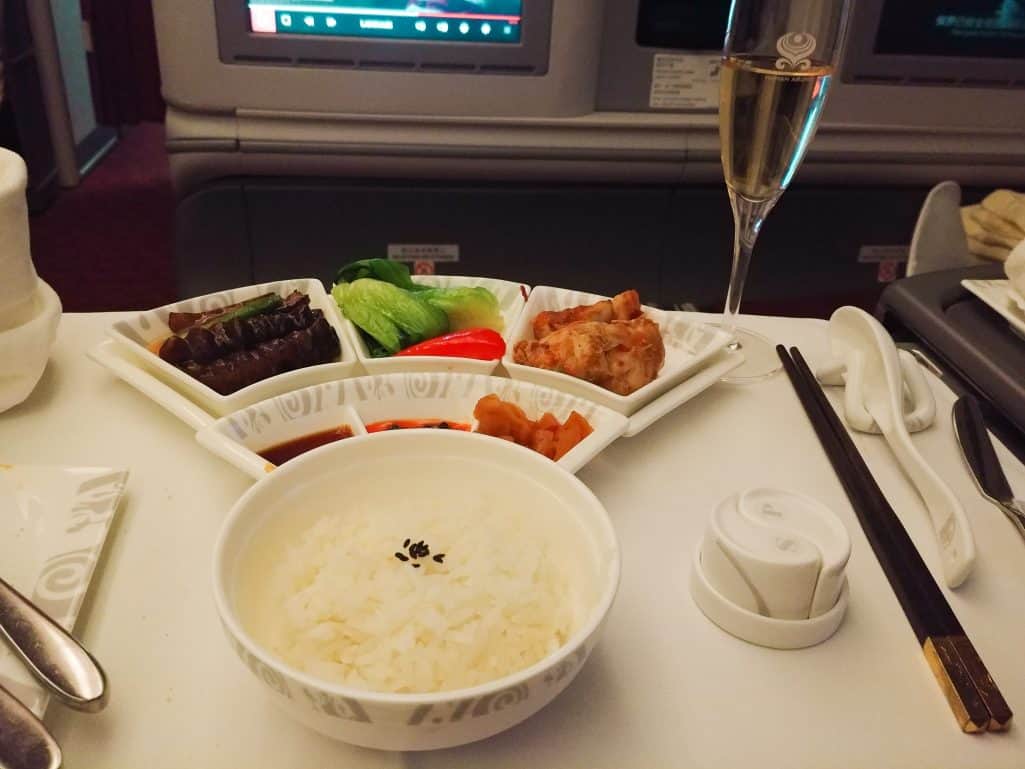 For those who are interested, we picked the braised sea cucumber, Kung Pao chicken, and baby bok choy with rice. Last but not least was dessert - cheesecake with strawberry coulis! However, we were too full to fully appreciate it at that point. 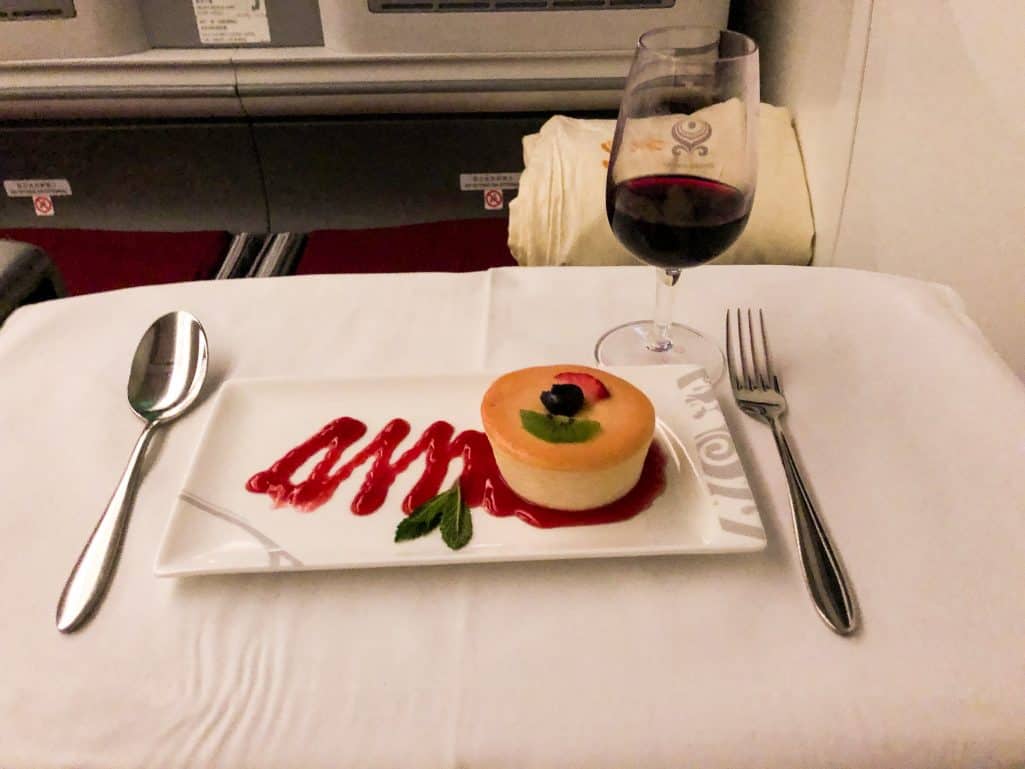 Luckily for us, the flight arrived in the evening so even if you are not able to sleep too much on the plane, you can sleep in a proper hotel bed shortly after arrival to combat the jetlag.  That’s what we had planned to do. What we did not plan was for Hainan to put us up in a hotel for the night. Of course, when you are offered a free hotel room you don’t say no, so we graciously accepted. The only problem was we had already booked a hotel months before for our layover, not knowing that one would be provided. It was 6:10pm local time, and quickly pulling up our reservation showed that we could cancel free of charge up to 6:00pm day of arrival. We frantically tried to find the correct phone number, and after being transferred around a few times to someone who could speak English, we successfully cancelled our room for a full refund and were off for a good night’s sleep.

After a successful 12 hours of sleeping, we awoke to a frost-covered Beijing airport hotel construction area. The hotel itself was nice, though the surrounding area was less than appealing. We had until 5:25PM for our next flight to Phuket, so wasting no time we grabbed a taxi and set off into Beijing! The thing about cabs in China is that most cab drivers don’t speak English and they also don’t read addresses. So we asked the hotel to order us a taxi to the Forbidden City. We had no idea where we were going and just looked out the window, hoping we would be taken to the right place! Sure enough, we were dropped close to the entrance and were able to enter and purchase tickets fairly quickly before the crowds arrived for the day. 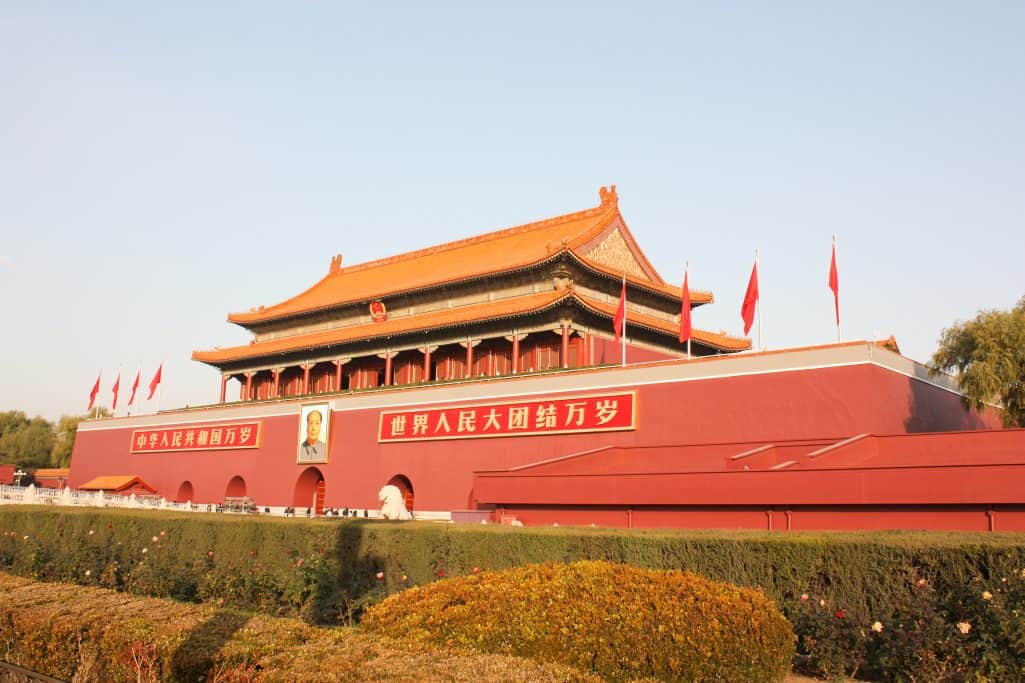 We knew the Forbidden City complex was big but didn’t quite realize how big it was. Consisting of 980 buildings over 180 acres, we had some ground to cover! Fortunately, there were (relatively) blue skies and sun as we explored the many gates, halls, and palaces. 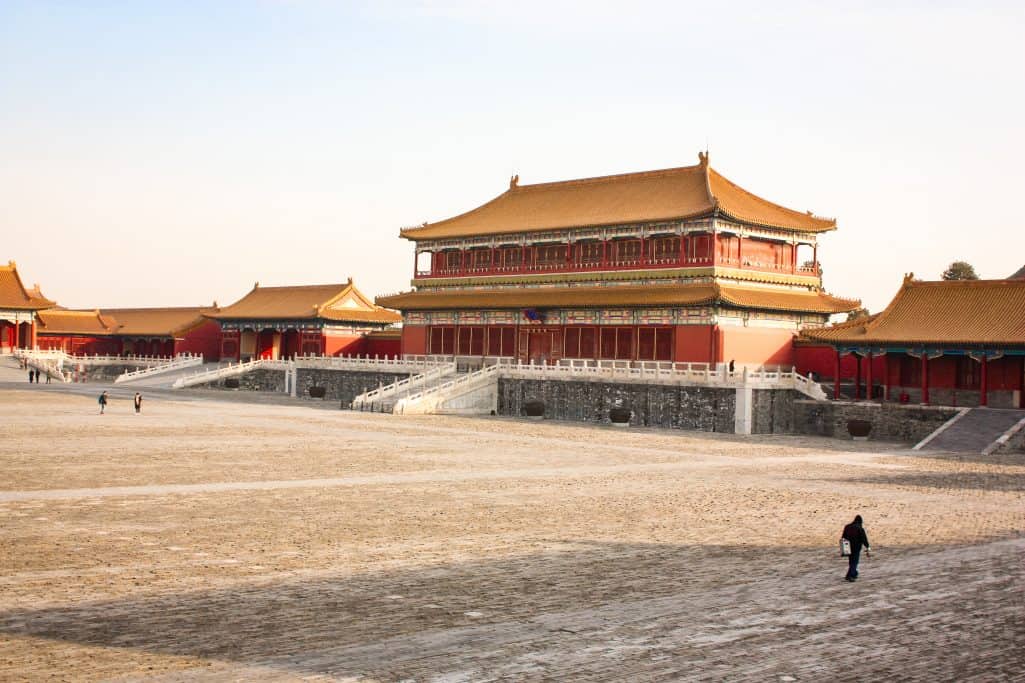 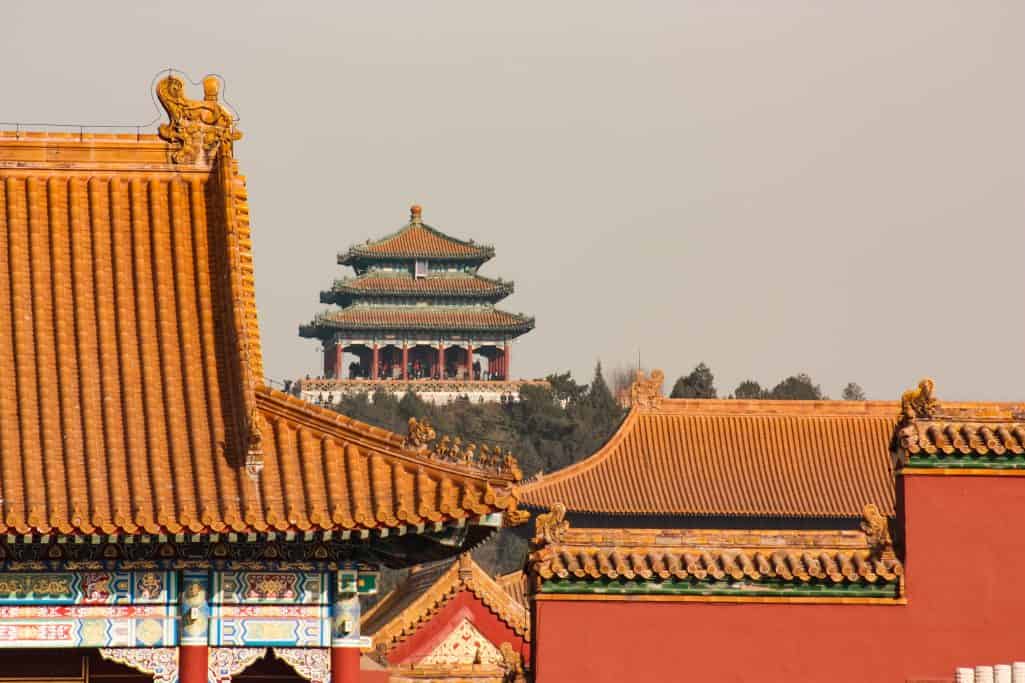 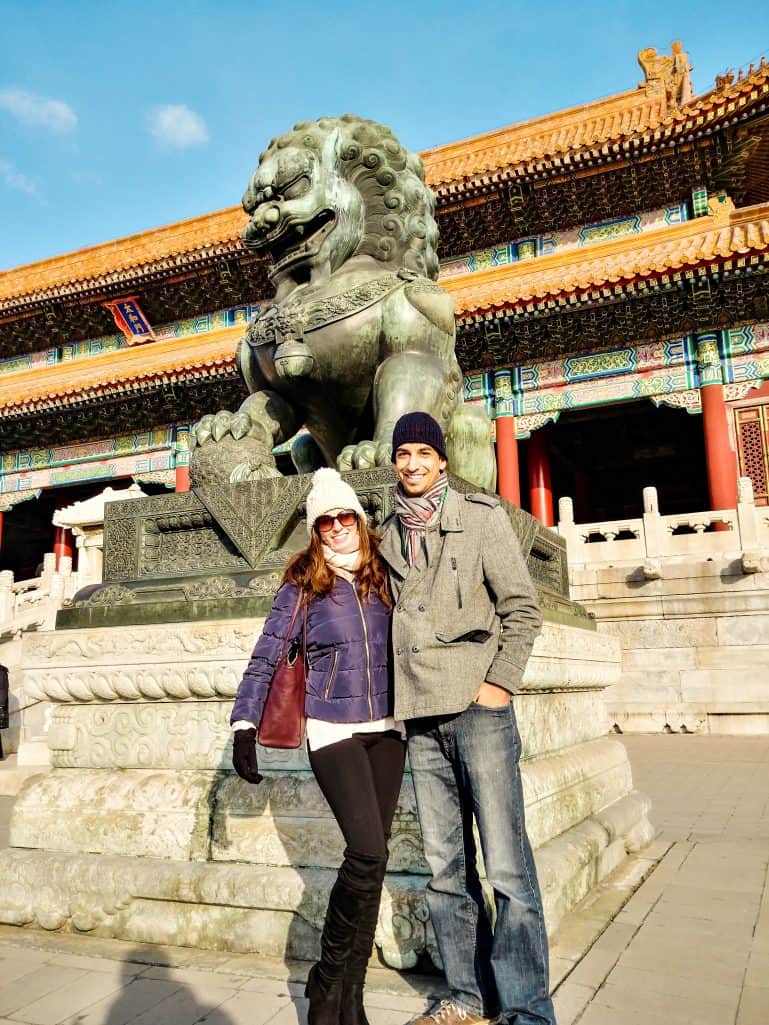 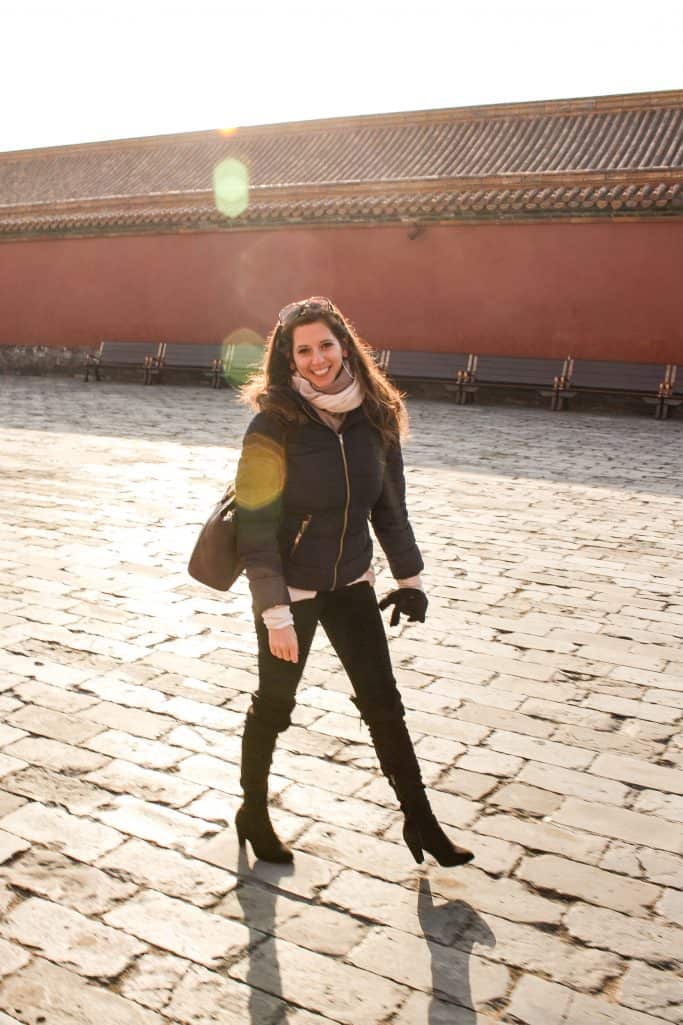 The attention to detail we found throughout the whole complex was incredible. 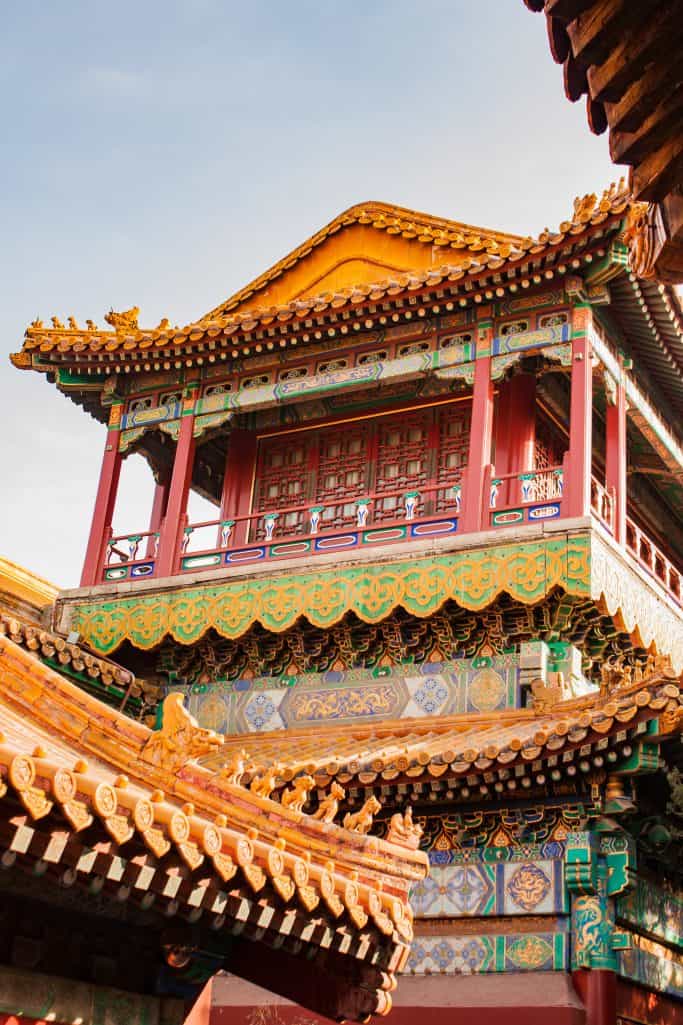 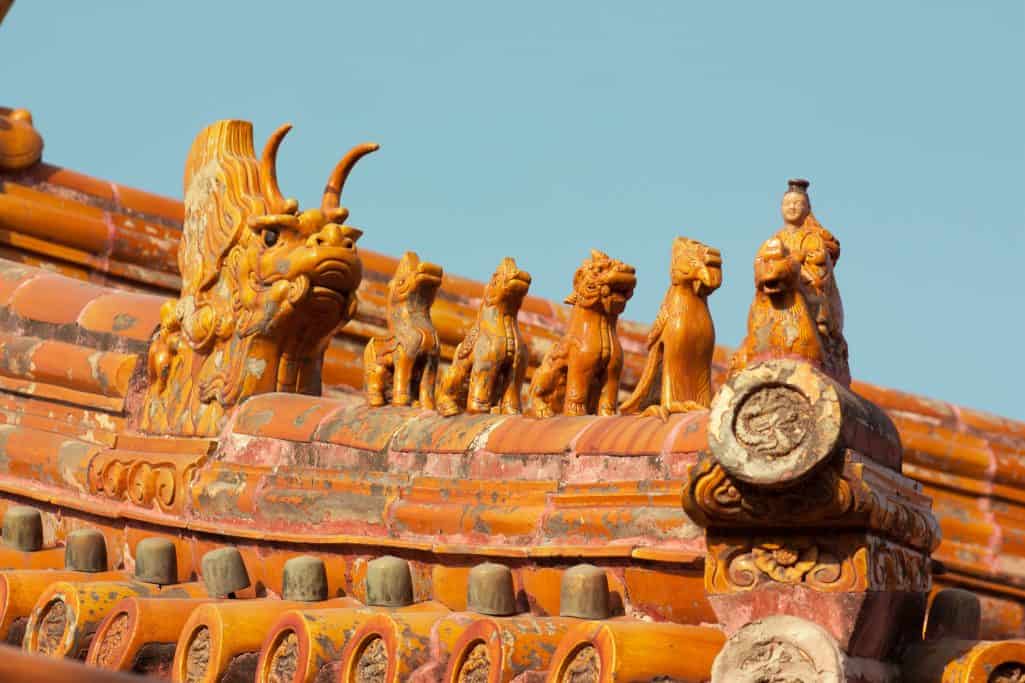 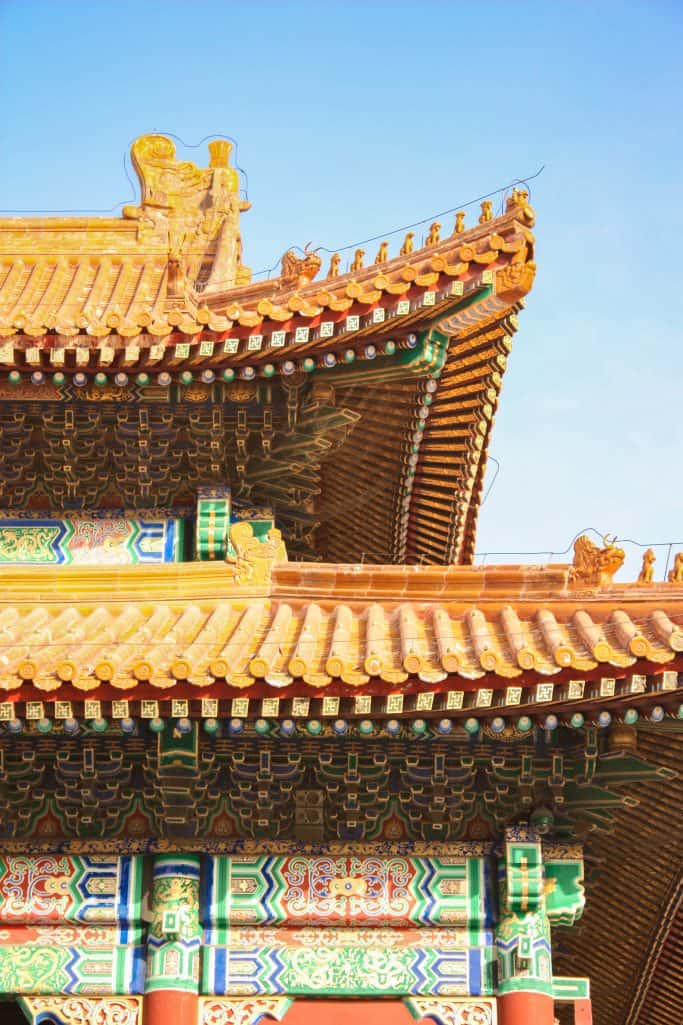 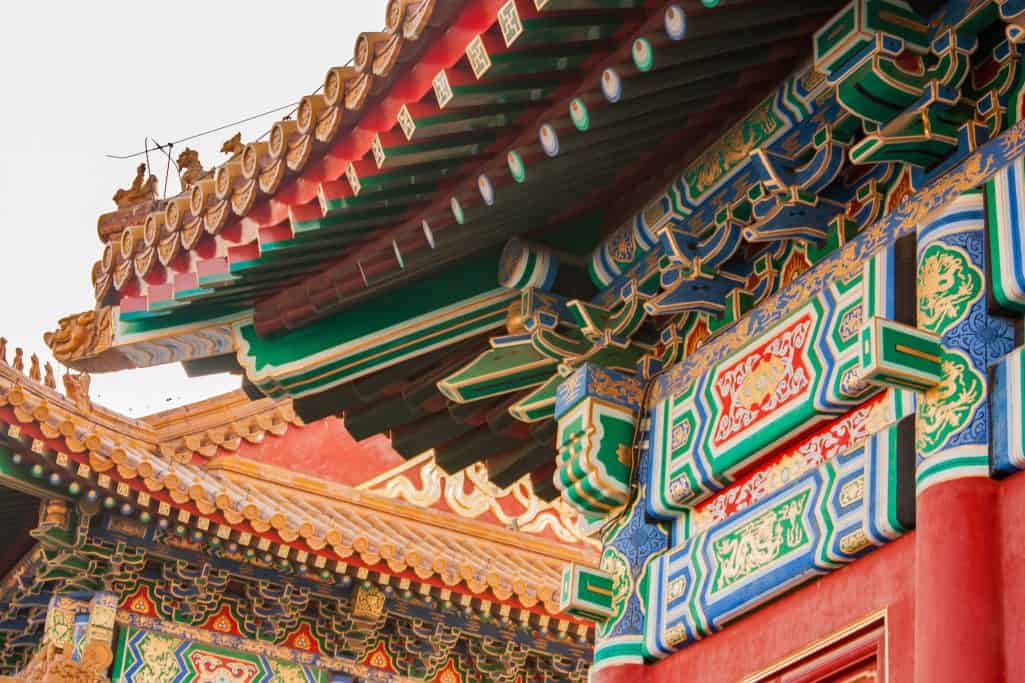 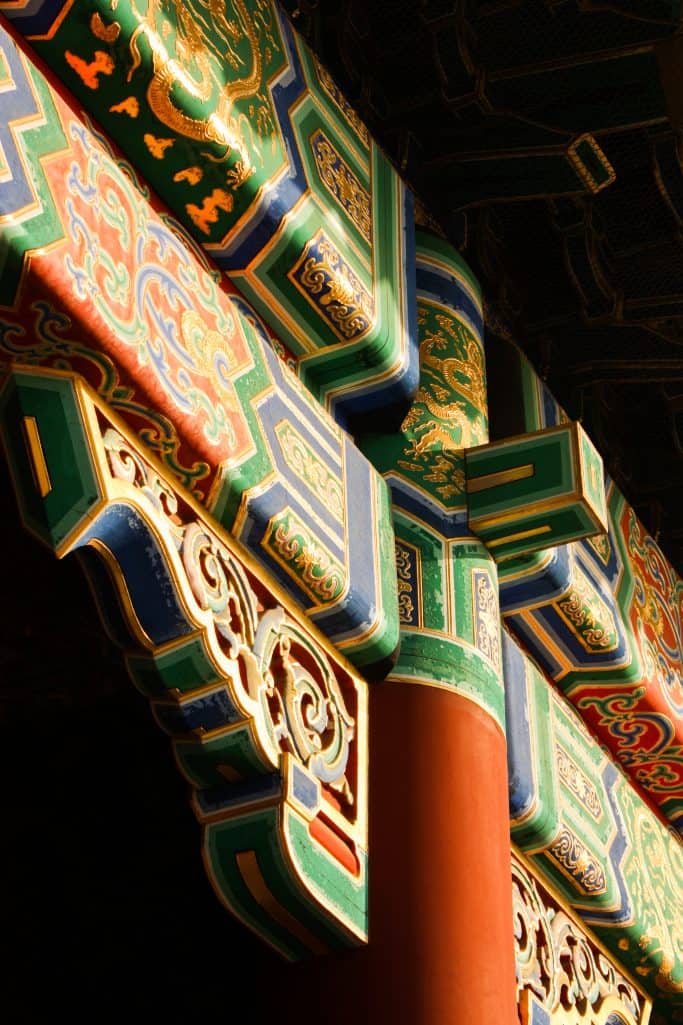 After struggling to find the exit (it took us an hour to get to the right exit after we had tried to leave the complex where we had entered), we proceeded to walk in the wrong direction to reach Tiananmen Square. 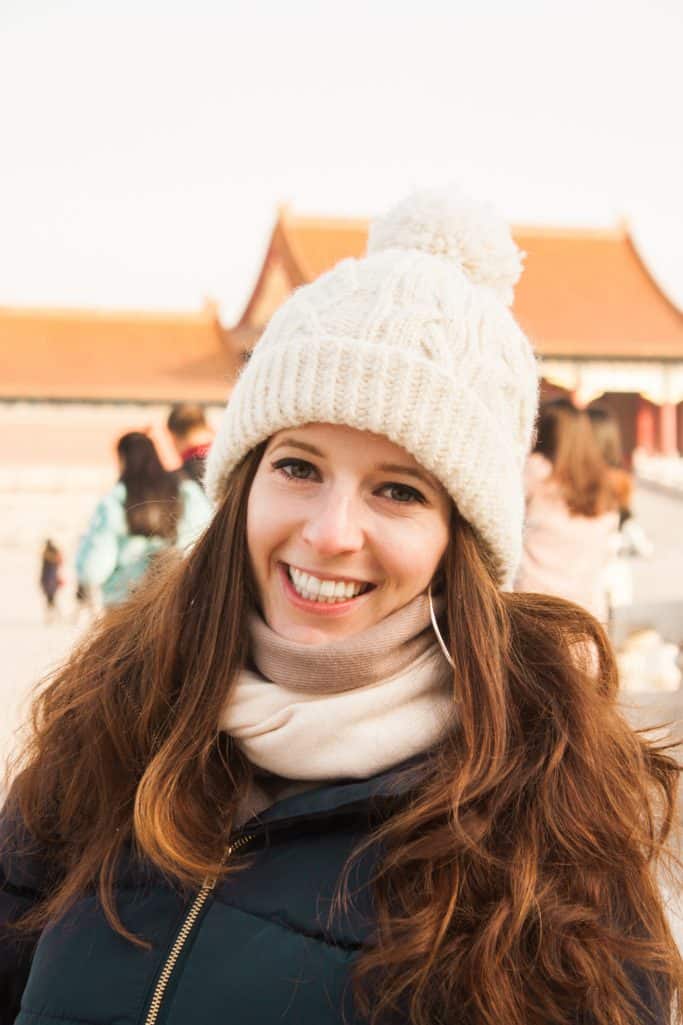 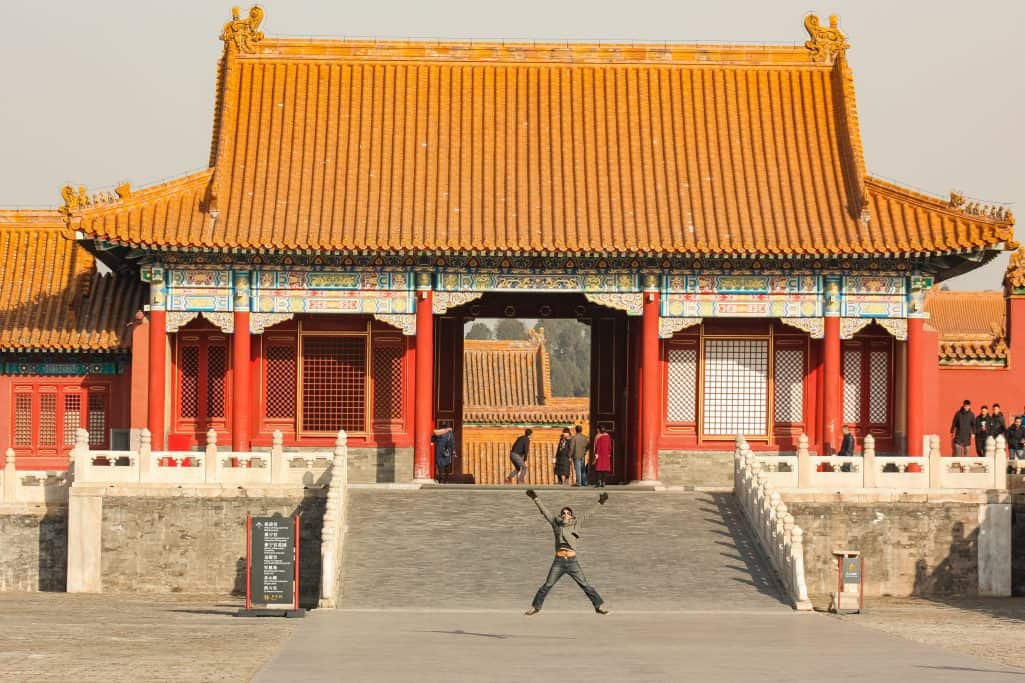 While learning about the history of the square is humbling, it is not overly picturesque so we continued on our self-made walking tour to Wangfujing Street for a quick bite to eat before grabbing a taxi back to our hotel and on to the next flight.  It was a quick few hours in Beijing, but with great weather and was well worth it! 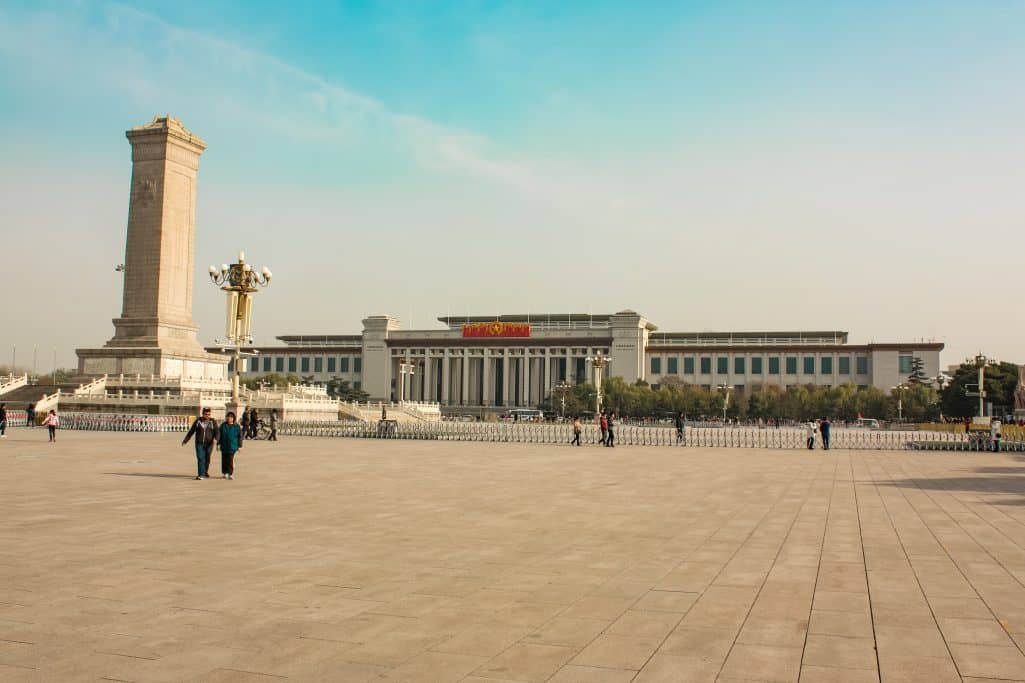 We made it back to the airport for our flight to Phuket with plenty of time to spare and were surprised how much you can see in 24 hours.

This website uses cookies to improve your experience while you navigate through the website. Out of these, the cookies that are categorized as necessary are stored on your browser as they are essential for the working of basic functionalities of the website. We also use third-party cookies that help us analyze and understand how you use this website. These cookies will be stored in your browser only with your consent. You also have the option to opt-out of these cookies. But opting out of some of these cookies may affect your browsing experience.
Necessary Always Enabled
Necessary cookies are absolutely essential for the website to function properly. This category only includes cookies that ensures basic functionalities and security features of the website. These cookies do not store any personal information.
Non-necessary
Any cookies that may not be particularly necessary for the website to function and is used specifically to collect user personal data via analytics, ads, other embedded contents are termed as non-necessary cookies. It is mandatory to procure user consent prior to running these cookies on your website.
SAVE & ACCEPT